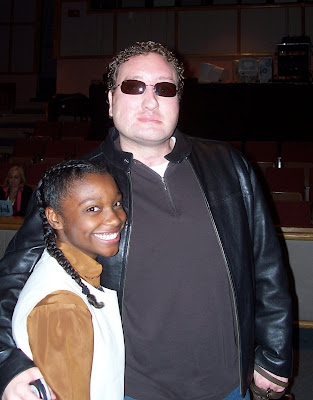 In high school, I took two useless years of French. Yeah, a lot of good that’s doing me now. Here in Florida, I hear Spanish several times per day – sometimes more often than English. But do I understand? Very, very little.

I have, however, been able to learn a few words. They’re not real useful, but they are fun! All that aside, my favorite recently learned Spanish word is “hija.”

What? You’re not fluent in Spanish? Well, allow me (he with little Hispanic knowledge) to enlighten you!

Hija is Spanish for “daughter.” I know this because of my Hija (notice capitalization).

See, my stepson’s girlfriend, Tiffani, is my Hija. Tiffani is of Dominican heritage, fluent in Spanish and has taught me most of the espagnol I know. She’s also taught me a lot about being a role model.

Hija (pronounced Ee ha) is one of the most precious human beings I’ve ever met. She’s allowed me to step in as a father figure where previously she’s had none. I don’t take that privledge lightly. Maddison and Jordan (my stepkids here in the Engel/Adams household) got to accept me, but Hija/Tiff actually chose me. Hija is, hands down, one of the most impressive young people I’ve ever had the privledge to know. To be a surrogate dad is, well, humbling, to put it lightly.

Last night, Hija was in her high school production of, “The Window School.” Sitting in the audience, I was as proud as I could be of my Hija up on stage!

Day after tomorrow, Hija hits the big 18. But, as with any kid, no matter how old she gets, she’s always going to be my Hija! Happy birthday, Tiff, I love you and am so proud of you! DL-M!