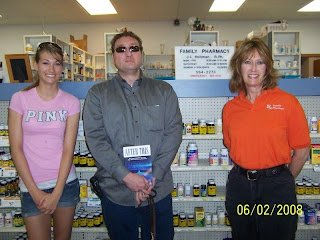 Well, it’s finally happened! Ever since the release of my books in the fall of 2006, I’ve looked for a retailer in my hometown. You’d think this wouldn’t be so challenging, but it sure was!

Then, a retailer found me! In March, I was honored to be the key note speaker at the National Honor Society induction at my alma mater, Montgomery County R-2 in Montgomery City, MO.

Attending the induction of their daughter, Ellie, were Jack and Janet Holtman, owners of Family Pharmacy in Montgomery City. Mr. and Mrs. Holtman (and Ellie) purchased my books and passed them along to several others after they read them. As always, I’m humbled and honored when anyone passes my book along with the recommendation, “Hey, you should read this!”

Well, Jack and Janet also decided to inquire about becoming a retailer of “After This…” and “The Other End of The Stethoscope.” I, of course, was ecstatic to be able to offer books to readers in my hometown by way of a local retailer!

Family Pharmacy is located on North Sturgeon in Montgomery City, MO. I hope folks from my home area will stop in, say HI to Jack and Janet, and maybe pick up a book while they’re at it!

Special thanks to Jack and Janet Holtman for their desire to help me spread my message!