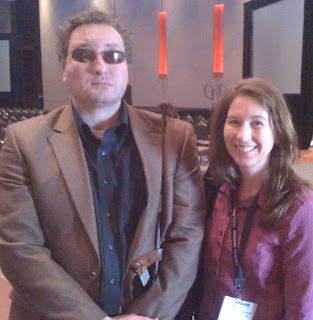 Ever think about the roads you’re driving? It’s a lot more than just laying down some concrete and painting some white lines down the middle-a LOT more!

Yet, most of us probably don’t even think of all the scientific engineering and planning that goes into helping us get from point A to point B. A couple days ago, I first rode on the new section of I64, 40/61 in St. Louis-a project which had STL traffic tied up for a good, long while (even though it was finished two weeks ahead of schedule.) The giant interchanges, the strength of the materials, the volume (both current and future) of cars travelling these roads; there’s so, SO much that goes into creating roads and bridges across our country!

And this planning starts with folks like those who were at the Transportation Engineers Association of Missouri conference. Both Missouri Dept. of Transportation engineers, as well as consultants and contractors who help get the project from idea to reality. When you take a few minutes to think about everything that goes into creating a new interstate-it’s pretty darned mind boggling!

But it’s more than just road creation. In fact, I was partially at the conference to help engineers understand the needs of pedestrians. Living with blindness as a disability, I have some unique needs to get around-as do all folks with visual impairments. These engineers are the ones who can help make travel safer and more efficient-for everyone!

TEAM was such a great experience…from the friendliness of my client, John Schaefer, to the ease of the business end of things with TEAM’s secretary/treasurer, Tim Redmond, to my co-presenter for pedestrian safety, Melissa Anderson, the whole experience was just phenomenal! Thanks to George Butler and Associates for buying dinner at Ernie Biggs on the Branson Landing and to the guy (Keith, I think your name is?) who grabbed me at Lambert Airport in a bear hug and announced to everyone, “Hey, Mr. O.G.!” Hilarious! Thanks, TEAM, for everything you do to help people like me do what we do, too!