I’ve made some great friends through the National Speakers Association, two of which are Jason and Kim Kotecki. They’re based in Madison, WI and run the Escape Adulthood Summit; a time for adults to regain that childhood fun, play and worry-free existence. Ya know, before we had jobs and bills and responsibilities. Learn more at: 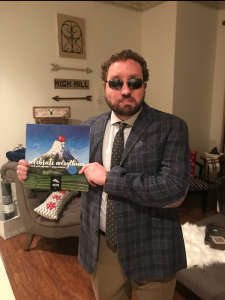 See that new 2018 calendar of Jason’s artwork? Yeah, we here at the I’m Here Movement are displaying it on the wall of our offices.

So, one thing I love about Jason and Kim’s Escape Adulthood philosophy is this: break the rules that don’t exist. Who says you can’t have cookies for breakfast? Who made a law that professionals can’t jump in puddles on their way to work? Why can’t grown-ups like Scooby Doo over art films?

These are rules that don’t exist, we’ve just all made our world boring by allowing our curiosity and fun to be replaced with work and mortgages. So, here I am in 2018, starting a new year…and here’s the first rule I’m gonna break:

A few years back, I read that one should only read one non-fiction book at a time. Hence, for the last four or five years, I’ve consistently been reading one fiction book along with one non-fiction book. It’s been a structure I’ve had in place…but why? I’m sure there was some reasoning behind it. Probably something about not getting distracted by too many different mediums entering the brain at one time.

But, I’ve done this before. The results were less than fatal. It was called college. Do you know any students who aren’t reading multiple works of non-fiction at once? I don’t.

So, starting now, I’m going back to reading more than just fiction and non, one by one. Starting with Eckhart Tolle’s “A New Earth” AND James Pennebaker’s “The Secret Life of Pronouns: What Our Words Say About Us.”

So, there! Take that, unwritten rule that does not exist! I’m breaking out of this invisible cage in which you have kept my mind.

Not even kidding, it feels liberating. And, it has me looking for more rules that don’t exist.