Is This Not The Cutest Thing Ever? 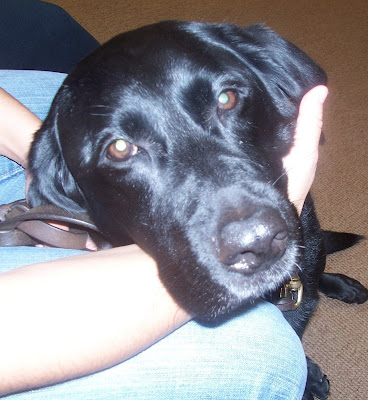 While at Eastern Washington University this past week, Carson fell in love with some students. Namely, Maria and Kaley. Before I spoke, Carson was in hog heaven with girls’ hands all over him (what can I say? He’s a guy!) I didn’t have the heart to make him take the stage with me, so he just chilled on the front row. Somewhere during my program, Maria and Kaley snapped this picture.

Every once in a while, I get someone who thinks it’s not fair that Carson has to drag me around the country, go into all kinds of unfamiliar places, experience different and major changes in weather patterns, that sort of thing. These people have apparently never owned a dog! A dog wants nothing more than to be with and please his/her master/mistress. And Carson gets that all the time! But he’s doubly lucky because not only does he get lovin’ from his master (and your humble blog author), he also gets to make new friends wherever he goes! And when you count it up? This west coast tour? Carson probably got petted by well over 500 people in the last couple weeks – it’s not every dog who can claim to be so pettable!